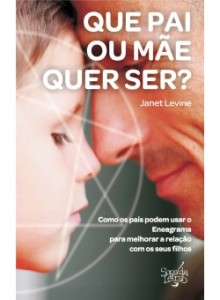 This is a cautionary tale told by an experienced practitioner (me) directed mainly at myself to heed my own words. Earlier this week I received copies of the Portuguese translation of my parenting book, Que Pai Ou Mae Quer Ser?. Definitely an “UP” moment in my writing life not only because the book looks attractive and professional but also because of the timing of its arrival. (The birth of this book has a sub-plot whose synopsis is germane to this blog.)

In the summer of 2009 I received an email from a Portuguese Catholic priest who had read the original American edition of my book Know Your Parenting Personality, an application of the Enneagram to parenting. He said something to the effect that he wished every parent in Portugal could read the book and asked about translation rights. I replied that was a promising idea I supported and he should approach Portuguese publishers who may be interested and then email me. And to my pleasant surprise, he did. A year later one of them www.principia.com contacted me. My agent and the publisher arranged a contract, and she cautioned me that it would not be easy to “get funds from Europe” (remember the low point of the Great Recession out of which we are slowly climbing?) I did not hear anything for two years and then in October there was an email from the publisher to say that because of the recession he had put many publishing plans on hold but now they were going ahead with the parenting book. And lo and behold, ten weeks later I have the translation edition in my hands.

Now for the “DOWN” moment (turning out to be a long one and therefore the reason why an “UP” moment is so welcome.) I am trying the old-fashioned way to publish my latest work, a novel Veld Fire. I wrote my heart into this book; and yes, I do know that is not a “gimme” to being published. (Call out here to my excellent editor, Lorraine Fico-White at www.magnificomanuscripts.com who saved me from my excesses and helped me shape the manuscript into a novel I am proud to stand behind.) The protagonists are two women and their love story is the engine of the work. (Call out to President Obama who in his Inauguration Speech highlighted Stonewall and gay rights as central to the ongoing struggle for human rights.) What better time than now to publish this book? What better time for a book about two people who love one another (and are women) to flow into the literary mainstream? Liv and Rosie’s story is set in 1960 in South Africa, the significant year of the Sharpeville Massacre and its aftermath. It celebrates history’s neglected PAC leader Robert Sobukwe and his contribution to the human rights struggle, in addition to a cast of many other real and imagined characters.

Agents have lauded the writing. But no one bites. South Africa is far away. Lesbians are not as popular as vampires. Historical fiction is but a tiny niche in the fiction market.

This is not my failure. I am a Three on the Enneagram and the  notional idea of “failure” is a big psychological hurdle for me. As a Three I am all about product and performance and “getting things done.” But here and now I need a dance partner. I do not want to self-publish, that smells of defeat; for me, for the whole publishing industry. How many thousands of worthy manuscripts languish and die every day? A writer once famously said the books that deserve to be published will find a publisher. Is this an old-fashioned maxim now as redundant as the traditional publishing industry is rendering itself? Maybe or maybe not. One of my sons, a writer himself, advised, “Let the process work.” But what process is he talking about?

Do I go Indie?

It took years for the Portuguese translation to reach me, this is my lesson to myself.