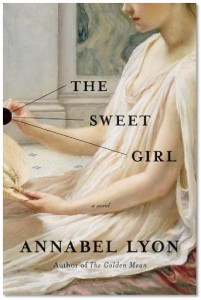 “But this narrative, a story of family domesticity and femininity—desires, wiles, superstitions—is light fare for a historical novel that delves into the philosophical ferment of Socrates,’ Plato’s and Aristotle’s world. After all, their studies, thoughts, interactions and writing, even after two millennia, remain the bedrock of all western philosophy.”

The sweet girl of the title refers to Pythias, daughter of the famous philosopher, Aristotle, and his dead wife also named Pythias. Daughter Pythias is reared by Aristotle’s former slave and current concubine, Herpyllis alongside her half-brother, Nicomachus (Nico) for whom, as a tribute, Aristotle named his famous philosophical treatise, the Nicomachean Ethics.

As Annabel Lyon’s narrative unfolds it stays true to the known events of Aristotle’s life and these create both the circumstances of the family dynamic as well as the framework of the novel.

An “outsider” born in Macedonia and tutor to Alexander the Great, after his star pupil defeats the Athenians, Aristotle moves to Athens where he studies and collaborates with Socrates.

But Plato, an Athenian by birth, inherits Socrates’ famous Academy and Aristotle founds his own Lyceum. After Alexander’s death in far away Persia, Aristotle deems it not safe for himself or his family in Athens and moves the household to Chalcis in Macedonia. Here they are treated kindly and shortly thereafter Aristotle succumbs to disease.

But this narrative, a story of family domesticity and femininity—desires, wiles, superstitions—is light fare for a historical novel that delves into the philosophical ferment of Socrates’, Plato’s and Aristotle’s world. Their studies, thoughts, interactions and writing, even after two millennia, remain the bedrock of all western philosophy.

Obviously with this focus on the feminine Lyon’s intent places the tale firmly in and on the sphere of the kitchen, the weaving room, and many household religious rites (including arcane midwifery practices). She uses stripped down, modern (often colloquial) prose to carry the narrative. For Pythias, the first person “coming of age” narrator, the center of her universe is not her esteemed father and his great mind but the trysts and twists that shape her emerging sexuality and womanhood. Lyon focuses on Pythias’ attraction for her adopted “cousin” Myrmex and interactions with the household slaves and servants, as well as Nicanor, a cousin to whom her father promises her in marriage.

While this book deliberately sidesteps the province of philosophy and the philosophers, it does bring to mind in a nostalgic way the world of the famous novelist of the 1950s, Mary Renault.

For instance, in her book The Last of the Wine, through the relationship of two youths, Renault expertly evokes Greek culture and highlights the impact of the uber philosophers. Clearly Lyon (like Renault) has immersed herself in details of everyday life in ancient Athens and happily shares her research, both specifics of daily life and Pythias’ interactions with goddesses and priests.

The prepubescent Pythias charms in her relationship with her father, who all but abandons her once she reaches the menarche. Thereafter we travel with her and the family on the journey to Chalcis, as well as on her journey to womanhood.

Virginia Woolf once famously asked in her essay A Room of One’s Own: What if Shakespeare had a sister named Judith? We will never know the answer.

But if Judith presented herself as a modern North American teenager without acknowledging the impact and influence of her famous brother than it is perhaps as well we do not know. And so it is with Pythias, a (sometimes not so) sweet girl and her famous father.