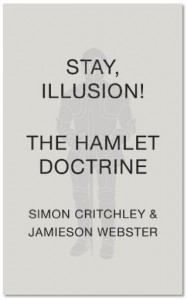 “Stay, Illusion! is not a graceful gavotte but a gallop through the fields of thought . . .”

Stay, Illusion! is a series of short (often very short) essays with an emphasis on developing a psychoanalytic and philosophical context for the world’s most famous play, Hamlet.

The thrust of the authors’ reflection here is not literary appreciation or even literary criticism but to develop a “philo-analytic” (my term) doctrine to contextualize the overwrought psyche of Prince Hamlet. This is not surprising as the authors are the husband and wife team Professor Critchley, a philosopher, and Dr Jamieson, a psychoanalyst.

The title of their Introduction to the book is Praised by Rashness and they acknowledge that they are not literary scholars and have chosen “a series of outsider interpretations of Hamlet” and continue that they are not “above rashness themselves” in their approach as they shape their doctrine. They conclude the Introduction sharing that they will proceed “rashly.”

In this process the authors succeed. Stay, Illusion! is not a graceful gavotte but a gallop through the fields of thought familiar to them and reined in by an almost whimsical tethering of their associative processes to specific references to the play. Riders who accompany them throughout the book are among the great modern philosophers and psychoanalysts such as Carl Schmitt, Walter Benjamin, Freud, Lacan, Nietzsche, Hegel, Melville, and Joyce, and others referenced, who happen to have written, mostly briefly, about Hamlet.

In Part 1, this wild ride takes readers through a brief but exhilarating summation of some of the major motifs in the play including the question: Why, for Hamlet, does thinking replace doing?

Part 2 notes those, “attempts to psychoanalyze the play’s eponymous hero.”

Part 3 links many of philosopher Nietzsche’s tenets in his first book The Birth of Tragedy to aspects of the play. The concise Conclusion makes the case for love being the strongest leitmotif in the play and, Ophelia, the true tragic hero(ine) of the play. Authors Critchley and Webster coyly end, “It is not without bucketfuls of shame that we write about Hamlet. . . . We are but unauthentic amateurs . . . this is essentially a book about nothing, for the love of nothing, for the nothing of love, for the love of Hamlet.”

So then, why write the book? Are these but two erudite Hamlet buffs writing a fan letter to the Bard? Are they strutting their “stuff,” the result of many a dinner conversation and Sunday afternoon talk, as they walk over the English countryside? Obviously Prof. Critchley and Dr. Webster can write; their prose sweeps the reader along.

But who are these readers? Shakespearean scholars (I number myself among them) will find this book adds nothing to their understanding of the text that has not been said before. In fact there is a utilitarian and facile quality to what lines of text the authors chose to quote—lines not to nudge the book toward a Hamlet doctrine—but to force fit the text to the philosophical and psychoanalytical doctrines of others.

Perhaps these are unfair questions to ask—the book entertains, refracts some new perspectives—and like the play remains illusive, enigmatic, forever out of reach.

A disclaimer: I teach and have taught the play Hamlet for over 25 years. Hamlet is the prototype modern Western man, filled with nihilistic angst and anxiety, neurosis and mad obsession.

The text, I believe, is all we need to try to understand this provocative and evocative young man.

Hamlet, the character, broke the mold of Elizabethan heroes of “the theater of revenge” and as such freed Shakespeare to stand (even now) head and shoulders above the great modern philosophers and psychoanalysts such as those referenced in this book.

Secondary sources abound in hundreds of books and thousands of theses and academic articles on Hamlet. But let the primary source “the play’s the thing” speak for itself.

Hamlet defies doctrines; and fortunately we do not need anything else.