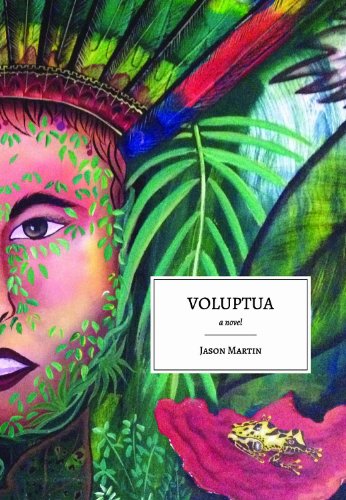 “The writing is weak. Somewhere amid the tangle of words and images is the potential for a novel, but not in this fictional effort.”

Voluptua is a novel about an inner search. Nothing wrong with that. After all Virginia Woolf wrote “we (writers of fiction) should make use of whatever comes our way.”

Author of Voluptua Jason Martin is a lifelong academic, a professor of French and Comparative Literature, and for the past 20 years an involvement in Amazonian shamanism. Perhaps he would have been better served writing a memoir of his life’s journey, because this is not a novel but a thinly disguised effort at making fiction from personal experience.

The crafting is transparently obvious, even amateurish. As a novelist and memoirist I know the effort involved in creative undertakings. And many novels are exactly what Woolf asks for: fictionalized attempts at conveying life experience, but author Martin’s endeavor does not succeed as fiction.

Rather Voluptua is a critique of the pettiness, intrigue, and sexual adventures that often accompany academic life. In the latter sections the book becomes a series of lectures on Amazonian shamanism served up in digestible bites to the 29-year-old protagonist, Ellen, as she transitions from “the prison” of academia to the mind-blowing “freedom” of inner exploration using a powerful natural hallucinogen, the ayahuasca brew.

Ellen travels to Iquitos, Peru, to find the “right” shaman to guide her before she begins experimenting with this psychedelic inducing drink brewed from various Amazonian native plant infusions. But in first half of the novel we are subjected to Ellen’s sexual experimentation with other professors, seedy Cuban gigolos, even an Indonesian janitor. Later in the book under the influence of ayahuasca she has phantasmagoric sex with four identical men.

Evocation of the Amazonian jungle setting likewise does not pass muster—not if you have read powerful novels of that locale such as Ann Patchett’s recently published State of Wonder set in Manaus, Brazil with its famous oddity, a full blown European opera house built at the juncture of the Negro and Solimões rivers in the Amazon basin. This landscape comes to fictionalized life with every visit to the opera house, every turn of the river, and every insect filled encounter of her protagonist’s journey. Martin’s Iquitos remains flat on the page, a flimsy film set of cardboard cut outs.

One can sum up Voluptua thus: A young academic teaches French Literature at a small liberal arts college among malicious, sensationalist peers who indulge in sexual machinations. She has dreams of traveling to Peru to try something she has recently learned about: a natural psychedelic concoction: ayahuasca.

She pursues the hallucinogen to unleash her “better” self but hesitates when she knows that ingesting ayahuasca involves much vomiting (“purging.”) Eventually she undertakes both the physical and metaphysical journeys and throws up—a lot.

Jason Martin has done neither himself nor the city of Iquitos and Amazonian shamanism a favor in publishing this book. The writing is weak. Somewhere amid the tangle of words and images is the potential for a novel, but not in this fictional effort.