Barkskins: A Novel by Annie Proulx 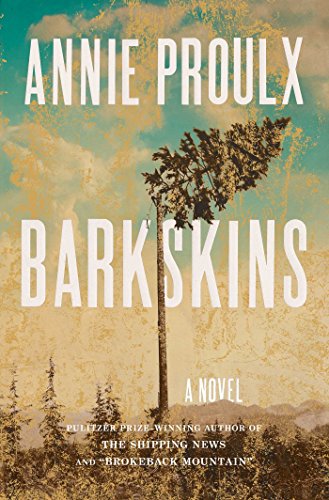 “Over 300 years the forests are raped, eco-systems destroyed, wealth generated, and the insatiable international desire and greed for wood exploited.”

Annie Proulx, the author of Barkskins is an accomplished American writer. She has achieved the status of grande dame of American letters and deservedly so. An earlier book, The Shipping News, is a stellar work, one with teeth and grit, lyricism and poignancy, dark as well as magical moments. That book remains a pioneer at the frontier of American fiction, as her protagonist, Quoyle, exists in one of the first portrayals of a single father as a heroic figure through the travails and triumphs of his small, dysfunctional family.

If readers hope for more of the same in Barkskins they will be disappointed. The book is overlong, the storylines confusing, the insertion of pages and pages of albeit interesting facts about daily life in the towering, primeval forests—the utensils, the logging tools, the clothes, the traditions, rites and rituals of all the people who meet, clash, and intermingle—are shared in almost overwhelming detail, so as to slow and even disrupt the novel. It is as if Proulx insisted on using all the detail she had accumulated in her ten years of research and writing of Barkskins. At the very moment we are engrossed in one of the story lines we are dragged back to arcane documentation.

The book opens in 1693 when two indentured Frenchmen, René Sel and Charles Duquet, arrive in Canada—New France—to serve as woodcutters for an eccentric feudal lord who built a grand chateau deep in the forests for his future bride (when he finds one).

Sel is forced to marry a native Mi’kmaw woman, and his progeny, through generations, vacillate between the two worlds of their generators—French frontiersmen and native Canadians or “original people.”

Duquet escapes his servitude to gain a foothold on the wealth the territory offers through fur-trapping, trading, and later enterprising forays into timber. He founds, and his descendants (later changing their last name to Duke), now timber barons, forge an international empire.

Both families’ genealogical lines are tied to trees, natural disasters, unexpected plot twists and turns—in frontier Quebec, then Michigan and hundreds of years later in the kauri forests of New Zealand.

Over 300 years the forests are raped, eco-systems destroyed, wealth generated, and the insatiable international desire and greed for wood exploited.

Overall the writing is fluid, and as would expect of Proulx her characters are exposed to states of the human condition from veniality to love. There are too many characters and episodes to cite here, but among the most intriguing is the union of Kuntaw, one of Sel’s grandsons and Beatrix Duquet, a granddaughter of Charles, and their life near the Penobscot people, river and bay in Maine. This union (although they never married) is one where descendants of the Sel and Duquet families unknowingly for many years in the second half of the eighteenth century, amalgamated their lives. They had no offspring.

Kuntaw and Beatrix meet on the muddy banks of the river:

He stood a few yards back from the horse and looked at the girl. She was elegant, wearing a black cloak edged in red. Something about her dark-ivory face said she was part Indian.

“You like to make some money?” she asked moving close. She lifted her head and inhaled his odor of smoke, meat and pine pitch.

“Split wood of course.” She enunciated very carefully. ‘You carry an ax. Do you know how to split firewood?”

“I need you, Indian man. Follow.” Beatrix Duquet turned her horse and trotted gracefully toward the big house, he had to run to keep up with her. Watching her long crinkled hair sway, the bright heels of her boots, he felt a wave of enchantment strike him like warm rain. So, in his thirtieth spring, began the strangest part of his life, as he seemed to stumble out of the knotted forest and onto a shining path.

Barkskins is an epic saga but unlike many of James Michener’s epic historical sagas or others such as The Thornbirds by Australian, Colleen McCullough, or Midnight’s Children by Salman Rushdie, to name only a few, Barkskins does not have the sweep and flow of history that keeps one reading through the night.

Perhaps the material here would be better served as eco-nonfiction, such as John McPhee’s The Control of Nature, Bill McKibbon’s The End of Nature, or Rachel Carson’s The Silent Spring and influence this and successive generations to save the planet and specifically in Proulx’s case, the forests that are left on our planet before they are denuded; however, as eco-fiction it falls below Annie Proulx’s admittedly extraordinarily high standards.

Perhaps her intention all along is to write a cautionary tale about the environmental catastrophe we have already wrought.

Why shouldn’t things be largely absurd, futile, and transitory? They are so, and we are so, and they and we go well together. —George Santayana

By destroying pagan animism, Christianity made it possible to exploit nature in a mood of indifference to the feeling of natural objects. —Lynn White, Jr.

These epigraphs certainly suggest the reason for Annie Proulx’s book encompassing the polemical tilt toward recording so thoroughly this irreparable damage.