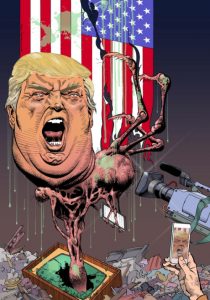 My Thought #1  I feel pity for Donald Drumpf because now I see him for what he is—yes, you read correctly—pity and sorrow, but still despising and despairing about what he stands for and what he’s done to our country. He is a cowardly braggart, narcissist, and both ego- and megalomaniac. These are but words to describe a very sick man. He is a bull gone amok in a china shop and now that he has almost shattered everything around him; exhausted, bewildered, he remains determined to bring the whole building down around your ears and mine.

Conflagration date; during the weeks before and after November 8; if, indeed anything is left of our political process by then.

Are you reading this Donald? A wise person told me that when someone is pointing a finger of blame at another, three fingers point back at—them. Do you get it?

Doesn’t a Drumpf yuuuuuge vacation seem like a good idea right now—for his own and all our sakes?

He is simply the most out-of-control and the most dangerous, unaware, unconscious and unconscionable public persona in American history. Not our first racist bigot, not our first fascist, but our first demagogue who channels Benito Mussolini and the far lesser but equally horrifying, (his “friend”) Roger Stone. Drumpf’s name will live on in infamy.

(The Guardian August 9): Roger Stone, an informal adviser to the Trump campaign, implied last month to internet agitator Milo Yiannopoulos that the notion of discrediting the election as “illegitimate” is part of Trump’s campaign strategy.

“I think we have widespread voter fraud, but the first thing that Trump needs to do is begin talking about it constantly,” Stone said. “He needs to say for example, today would be a perfect example: ‘I am leading in Florida. The polls all show it. If I lose Florida, we will know that there’s voter fraud. If there’s voter fraud, this election will be illegitimate, the election of the winner will be illegitimate, we will have a constitutional crisis, widespread civil disobedience, and the government will no longer be the government.’”

“If you can’t have an honest election, nothing else counts,” Stone continued. “I think he’s gotta put them on notice that their inauguration will be a rhetorical, and when I mean civil disobedience, not violence, but it will be a bloodbath. The government will be shut down if they attempt to steal this and swear Hillary in. No, we will not stand for it. We will not stand for it.”

This is what I mean by “conflagration”. Come on folks, we are hearing this very script pertaining to Pennsylvania for a week already; except he is not leading in Pennsylvania.

Who can save this very sick man—and us—from all our worst nightmares manifesting? His children can, if they approach him along with his innocent grandchildren, and lead him gently out of the china shop. But Ivanka &Co, better ask him to get his foot out of his mouth first if he wants to walk and not fall and be carried out by them.

Thought #2 President Obama’s reading list is impressive in its eclecticism:

“The Underground Railroad” by Colson Whitehead

“H Is for Hawk” by Helen Macdonald

“The Girl on the Train” by Paula Hawkins

I’ve only read “H is for Hawk”, an excellent book being made into a movie. Read a review http://www.nyjournalofbooks.com/book-review/h-hawk