JANET LEVINE BLOG: NYJB REVIEW: In the Midst of Winter

In the Midst of Winter: A Novel 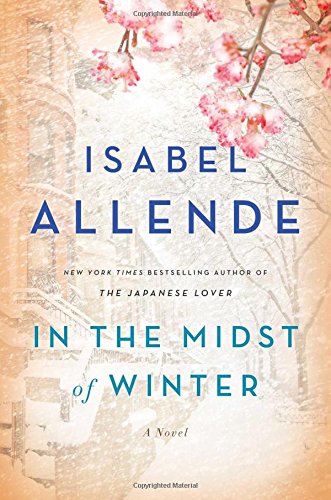 Well known and adored by millions of readers worldwide, Chilean-American author, Isabel Allende with her 21st novel In the Midst of Winter will please multitudes of her fans and also leave them uneasy. Uneasy because while this novel displays all the Allende hallmarks that made her famous—passages of eloquently expressed ideas, a love story set amid political turmoil, well-drawn characters—fundamentally it lacks cohesive plot tension to hold all the elements together. The novel moves in jumps and starts.

This may be because of the unwieldy structure that cuts across time periods and continents. The clichéd device of hiding a murdered, frozen body in the trunk of a stolen car never achieves the state of noir drama the author may have intended. Rather it undercuts tension and becomes the most slapstick of moments in the novel, as the young, female body lies untended in the trunk of the car while the snow falls. Yet nearby, seemingly oblivious to the corpse, and inside various more or less warmer locales, the three main characters weave and bob around one another telling their stories, until inevitably two of them have furtive sex in clumsily rearranged sleeping bags.

The novel revolves around Evelyn Ortega, a young Guatemalan born, illegal immigrant whose story of escape is harrowing and her story of survival in the United States only slightly less so. Another main character is Lucia Maraz, an older woman, Chilean born who has lived in exile in the United States and Canada for decades. Her work in academia has thrown her and Richard Bowmaster uneasily together. He is her curt landlord, and they work in the same department and university. Richard, a sixty-year-old reclusive man, seems impervious to human empathy as he moves through his almost monastic, stripped down life. Yet he carries the secrets of a disastrous marriage to a passionate Brazilian woman earlier in his life. In their life in Rio de Janiero several devastating family tragedies left him emotionally frozen and insecure.

As the novel unfolds the three are thrown together when, on a frozen and slippery road in Brooklyn, Richard rear ends the car 20-something Evelyn is driving. A minor accident that draws into the novel the murdered body in the trunk of Evelyn’s car. Richard summons Lucia to help with translating Evelyn’s panicked responses. This is where the novel goes off kilter. The events of dealing with the body have none of the power of the three life stories. The protagonists could as easily have been sitting around a campfire sharing their stories.

Evelyn’s story is among the best writing in the book. Allende uses her background in Chile and her admirable lifelong stand for human rights (evident in most of her work) in relating this story. We learn the painful truth of the escape path from Guatemala, through Mexico, to the United States border. And of the indifference of U.S. border officials who daily deal with hundreds of would-be immigrants. We also learn how illegal immigrants can simply disappear amid millions of Americans if they avoid law enforcement and institutions such as hospitals.

Early in her story, Evelyn shares how as an adolescent she was brutally raped by gang members of the notorious narco-trafficking gang (60,000 members), MS-13, as punishment for their betrayal by her older brother. He is murdered as is another brother, Andres. During the rape Evelyn witnesses Andres’ throat being cut.

After that incident Evelyn cannot or will not speak. Her grandmother takes her to a well-known healer. In one of the most memorable scenes in the book—with Allende’s evocative descriptive power at its best—the healer gives her ayahuasca tea to drink and in a hallucinatory state:

“The visions came in rapid succession. In some of them, her mother appeared as she had last seen her; others were scenes from her childhood, bathing in the river with other children, or at age five riding on the shoulders of her elder brother, a jaguar with two cubs emerged. . . . She surrenders completely to the drug and as she did so, lost all her fear. The mother jaguar returned with her cubs, and Evelyn dared to stroke her on the back. Her fur was rough, with a swamp like feel. The enormous animal accompanied her as she entered and left other visions, watching with her amber eyes, showing her the way when she got lost in abstract labyrinths, protecting her when any evil being came near.”

The healer gives Evelyn an amulet representing the power and protection of the jaguar. In the conclusion of the novel—in a scene reminiscent of Allende’s previous magical realism writing—the jaguar is invoked again.

Allende is a masterly writer when she writes of emotions, and especially of love. “With Lucia, Richard felt as if decades had been ripped from the calendar and he was eighteen again. He had thought he was immune, and yet there he was, like a youngster prey to his hormones. . . . In those divine hours of night, he was accompanied for the first time in twenty-five years; he felt so close to her as they breathed in unison. It was very easy to sleep with her, and very complicated what was happening to him now, this mixture of happiness and terror, of anticipation and the wish to run away; the urgency of desire.”

On the final page of the novel, Richard, in response to a query from Lucia, quotes Albert Camus: “In the midst of winter, I finally found there was within me an invincible summer.”

Ultimately this is a novel of the redemptive recording of oral history and also of healing love. The murder subplot is an unnecessary add-on.