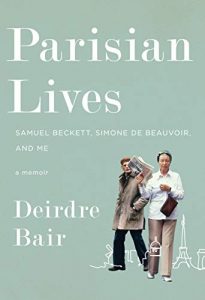 “The gift Bair gives us in Parisian Lives is a direct and knowing contemplation of the works of two literary giants—and the circumstances of their lives as they wrote. Her memoir radiates that same honesty when she writes about her own life and work.”

Parisian Lives: Samuel Beckett, Simon de Beauvoir and Me: A Memoir by Deidre Bair is a memorable read that will be celebrated extensively both by the general reading public but also by anyone associated with the theater, as well as those fascinated by or working in any aspect of the writing process.

The author, now in her eighties, uses extensive notes and journal entries to share never-before published insights and anecdotes, intimate glimpses into her life, as she also takes us into the lives and homes of two of her most famous subjects, Samuel Beckett, Nobel Prize Winner for Literature, and Simone de Beauvoir, iconic feminist writer and philosopher. Bair won a National Book Award for Samuel Beckett: A Biography. She won many awards and prizes for her several other biographies, and became a nationally known, stalwart American biographer of literary figures and others.

Bair’s memoir chronicles two decades of her life from 1971, when she moved from being a part-time journalist, part time university lecturer, part time wife and part time mother (as she admits not always successfully juggling all these “parts”) to become one of America’s most able and popular biographers and an Ivy League professor. The book has a distinct feminist flavor detailing Bair’s struggles in the patronizing and paternalistic worlds of publishing and the academe. Parisian Lives is extremely readable; you feel you know areas of Paris as well as she does, and she writes with evocative detail.

For example, her description of the funeral of Simone de Beauvoir is powerful and heartfelt. As Bair marches with the funeral cortege to the cemetery she has “a real feel of community with many different people. The cortege passed slowly down the rue Saint-Jacques because of the crowd estimated at between three and five thousand, which pressed close to the hearse. People wanted to touch it, and it was swamped with flowers.” . . . “The crush was frenetic. Lanzmann read the end of ‘Force des Choses’ and ‘Adieux’. We all stayed—inside the cemetery and outside the gates—it seemed forever. Even though it started to rain, no one wanted to leave.”

Bair begins her memoir by describing how her love of writing was first evident to her:

“When the opportunity of a writing fellowship in the newly formed program at Columbia University’s School of Arts came along in 1968, I embraced it. I thought it would be a peaceful respite for several years during which I could read novels and write about them without the pressure of daily deadlines. I thought it would enable me to recharge while also sharpening my skills for a writing career.” . . . “I don’t exaggerate when I say that I had fallen in love with reading and talking about literature, and somehow I wanted to find a future career that would let me continue.”

Several years later, through the intercession of some of her teachers and mentors at Columbia University she is introduced to Samuel Beckett, and pleads with him to let her post-graduate studies of his work and her intense interest in his career grant her access to him so she can write his biography.

Beckett is an Old World man; older, near the end of his remarkable career. He is private, curt, unreliable, hard to track down, and irascible, as well as a heavy drinker and womanizer. Young (thirty something) Bair is in awe–of him and her good fortune. He says he will cooperate with her, and she should write his biography. For over seven years Bair exhaustively tracks down his friends and sources of his work in Ireland, France, the United States, and many places in Europe. She has no idea how to write a biography, but gradually her path becomes clearer:

“Where others saw Beckett primarily through a lens of existential angst, I found humor and pathos in equal pasts, much of it stemming directly from what I was learning about his family background and the Irish literary tradition. I wanted to open up new avenues of interpretation, but even more important, of appreciation, I want to write not only for an academic audience but also for the intelligent reader who wanted to understand the creative vision of this writer, who had given us so many brilliant novels and theatrical experiences.”

One of Beckett’s friends suggested that he agreed to cooperate with her was because he expected her to write hagiography, and he enjoyed working with a comely young woman. Ultimately, and characteristically, Beckett made little comment when he read Bair’s honest and thoroughly researched book. It is definitely not hagiography. In his response, he was as elusive and aloof as he had been in all their dealings.

Working with Simone de Beauvoir was quite a different experience for Bair. Beauvoir invited her to write this biography (others had already been written.) Beauvoir was friendly but remote, always on time for meetings, helpful about facts, but she showed no interest in sharing her feelings as to the events in her life. Once again, Bair did exhaustive research, but the work was much easier than it had been with Beckett. She found Beauvoir’s sister, Hélène, to be a great resource and through her became friendly with Beauvoir’s extended family,

“Hélène, said that I must write what Beauvoir told me, ‘That is what my sister believed, and you must allow her to have her memory of her life.’”

Although Beauvoir was a private person she was not reclusive. She did not play smoke and mirror games with her circle of friends and acquaintances as Beckett had done. Bair worried that she was beginning to like Beauvoir too much to write an objective biography,

“When I began to write about Beauvoir in the early 1980s, the larger women’s movement mirrored my own struggles as women began to reclaim their place in history and demand to take their places in all walks of professional life. Simone de Beauvoir was a role model, as she had been subjected to every outrageous sling and arrow throughout her life, even as she remained dedicated to her writing career. By her last decade, feminist women all over the world used her tenacity as their example. When she espoused causes and joined protests, they lined up behind her. In effect, she was a sister in arms, and I always thought her advocacy of feminist issues was one of the reasons she welcomed me so warmly. She simply wanted some to consider all her work, and for her, the personal hardly mattered; all she cared about was ensuring that her many contributions to contemporary culture would be recognized for generations to come.

“I knew I was no going to write hagiography, but to what degree, if any, should I act as her advocate, or if no that, as her debunker. Finding the proper voice consumed me. An example when writing of The Second Sex, instead of giving a summary of the text, I wrote a history of its evolution from when Beauvoir first got the idea for it and how she wrote it to how it was received by readers, particularly the impact on American readers. In effect I wrote a capsule biography of her book within the larger biography of her life. My intention was to give the full spectrum of responses—from the hostile, bitter, sarcastic and demeaning to the shock of the new, the recognition among women of common anxieties and concerns. Beauvoir gave them hope as she addressed their questions about how to navigate their private and personal spheres and how to find possibilities for engagement with the larger public world.”

Bair recognized that clearly the Beckett biography couldn’t serve as a template or model for the Beauvoir biography. He was still living and working when she finished writing his, which freed her from feeling, “an intense need to make it a final, finished document; he was still writing and something new was happening to him every day.” But Beauvoir had died before Bair finished her biography.

In her concluding chapter Bair sums up her responses to both literary giants,

“Samuel Beckett and Simone de Beauvoir had purity of vision, certainty of the rightness of their conduct, the worth and value of their writing. Beckett insisted that ‘nothing matters but the writing.’ Time and again he said ‘I could not have gone through this awful wretched mess of life without having left a stain upon the silence.’ Simone de Beauvoir refused to let herself be turned into a monument. She regretted being known as France’s ‘sacred monster,’ but if this distinction meant she had influence among the generations that followed, she was willing to let it stand.”

Bair writes, “For me Beckett and Beauvoir were role models. I respect their contributions to contemporary culture and society, and with humility, I am grateful for having known them. But I admit that filtering the variety of experiences and the fervor of my admiration required multiple revisions before I arrived at what I hoped would be a discreet and understated record of the originality and achievement of both writers.”

The gift Bair gives us in Parisian Lives is a direct and knowing contemplation of the works of two literary giants—and the circumstances of their lives as they were written. Her memoir radiates that same honesty about her life and work.