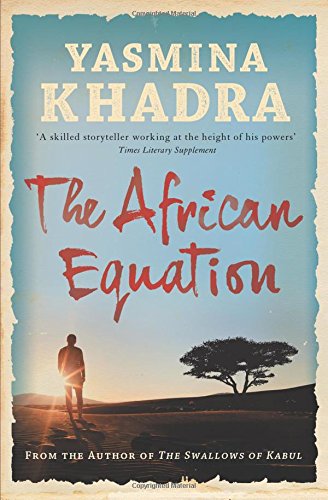 “Khadra’s didacticism ruins this book and leaves the novel bereft of his previously demonstrated literary power.”

The African Equation is an oddly simplistic calculus.

Yasmina Khadra, an internationally acclaimed Algerian born writer now living in France, stands out among those authors at the forefront of the wave of contemporary excellent African writing. His early work, rooted firmly in his native Algeria, powerfully portrays that country’s post-liberation struggles.

Recently his most popular novel The Swallows of Kabul helped Western readers learn about the complexities of Islamic fundamentalism and the Taliban. This well-reviewed book generally gained accolades for Khadra’s powers as a gently perceptive and effective writer.

Therefore his latest work The African Equation surprises, if not shocks, in its simplistic and unsubtle rendition of the current dire scenario that continues to unfold in the countries of Africa’s Horn region, notably, Somalia, North and South Sudan, and Djibouti. First published in French in 2011, it is now available in translation.

The novel begins in Frankfurt, Germany where the first person protagonist, complacent Dr. Kurt Krausmann, struggles in the wake of his beloved wife’s almost inexplicably facile and self-indulgent suicide over failure to win promotion at work. His friend Hans, a wealthy philanthropist, persuades Kurt to sail with him on his yacht to the Comoros Island with donations of equipment for a new hospital there.

Off the Somalia coast pirates attack the yacht, throw the cook overboard, and subsequently (for too many pages) hold the duo hostage in a series of desperately ruinous rural, desert camps. Here the other protagonist emerges, a thug, Jomo, leader of this motley array of rag tag pirates, who mistreat the hostages with almost every inhuman torture and humility you have ever read about.

Kurt is rescued by the Red Cross (no less) and finds himself in Darfur (of all places) the generalized modern archetype of hell. No more spoilers.

The “plot” posited on such a simplistic equation—on one side, Kurt: white, German, decadent, inheritor of Nazi atrocities, and on the other, Jomo: African, bestial, drunk, savage, purveyor of current terror and horror—becomes a caricature of cardboard characters who function as polemical mouthpieces for Khadra’s frothing didactics on a mythical Africa.

The conversation quoted here between Kurt and Bruno, another hostage, is typical of the dialog. The conversation takes place in a filthy cage where for weeks the men have been tortured, starved, half blinded and traumatized. Yet they talk as if conversing in a comfy bar in Frankfurt.

“Africa is more than the sum of its famines, wars and epidemics.”

“Then what else is it in your opinion?”

“The refusal to what?” I cut in. “To transcend misfortune, is that it? You can’t turn vomit into a banquet, Bruno . . .”

“Africa” as portrayed is another inexcusably ill-conceived concept for a writer of Khadra’s intellect and reputation. He should know better than to amalgamate an entire continent with all its complexities, one billion people, many languages and cultures, religions, politics and landscapes, promises and calamities, into a one-word slur.

Didn’t Heart of Darkness featuring Colonel Kurtz, and published 130 years ago, sear our imaginations and fill that purpose? Khadra must have acknowledged that dark cynicism shot through with misanthropy pervades his text. For in the latter part of the book, he tries to shift our perception by creating a ridiculously romanticized antidote to his poisoned verbiage. In this after thought the Europeans “see the light” (of course) while the Africans, according to Khadra, continue to struggle with moral myopia, miracles, mysticism, mosquitoes and moribund, morbid lives.

Khadra’s didacticism ruins this book and leaves the novel bereft of his previously demonstrated literary power. The book bolsters the very stereotypes and misrepresentations he may have strived to destroy. It is an insult to the intelligence and knowledge of his readers.

Janet Levine is the author of Inside Apartheid, her political memoir exploring her role and that of white activists in the anti-apartheid struggle.