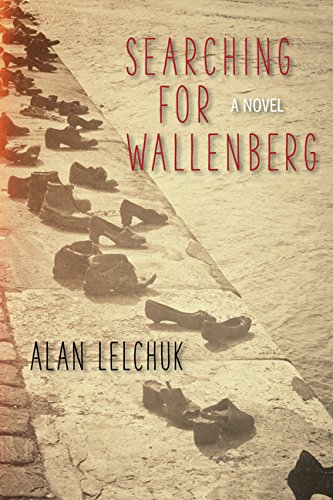 As we follow Gellerman on his picaresque journey he writes his own novel on Wallenberg. If this sounds confusing, at times it is, but ultimately the novel is a satisfying read.

The outline events of Raoul Wallenberg’s life are well known, but his two-year incarceration and death in a Russian prison, Lybianka, in 1947, remain a mystery. Gellerman, following leads uncovered by a graduate student he mentors through her post-graduate thesis process, provide the impetus for his search for Wallenberg.

Alarm bells sound when Gellerman, in questionable academic practice, uses the student’s research to further his own academic ends. There is leeway here, of course, for initially he suggested she research Raoul Wallenberg’s demise. His impetus to follow this trail himself arises when she surprises him by uncovering (on a sojourn in Budapest) possible evidence of Wallenberg’s mistress (possibly even wife) and granddaughter (still living) in Hungary.

Despite this worm in the Edenic apple, Lelchuk clearly evokes the pastoral idyll that is Ivy League, Dartmouth College in Hanover, New Hampshire (bordering on Vermont). The author himself teaches at the college and his clear-eyed exposition on the self-satisfied smugness of tenured professors who never challenge themselves rings true.

But Gellerman, divorced and fit (he walks a good deal around campus and plays tennis), in his mid-sixties, shakes up his own fretful complacency by spending the summer months in Budapest and parts of Russia searching for Wallenberg. In Budapest he meets Zsuzanna Wallenberg possibly Wallenberg’s granddaughter, and an intriguing relationship ensues.

One of the author’s strengths is the creation of many interesting characters, among the most engaging his young teenage son, Josh, a cello playing prodigy, whom he calls “the boy,” and Wallenberg’s KGB interrogator, Daniel Pagliansky.

A downside for this reader is the clumsy means the writer uses for separating the strands of the novel. A solid, black line on the page between Gellerman’s writing and Lelchuk’s narrative of Gellerman is all we have. The author makes no attempt to fuse the two.

Disconcerting as well is Gellerman’s propensity to criticize and question if his fictional choices suit his academic purpose in scene after scene that he creates on his computer narrating the story of Raoul Wallenberg’s demise. Gellerman continually questions whether he is preserving Wallenberg’s legacy and furthering the historical record or adding more confusion to the mystery?

Perhaps this is the author’s (rather unsubtle) intention to keep reminding his readers of Gellerman’s premise that all history is fiction and all fiction history (a current lively debate in academia’s Humanities departments). Gellerman teaches a seminar on History through Literature and as he reflects on this course “each book presented a different problem about how history had entered fiction and, conversely, how fiction had shaped history.”

As the students discuss, “Sure, here in a novel he can interpret as much as he wants. . . . But if he were writing ‘real’ history?” Another says, “What do you mean ‘real history’? Don’t historians make their own interpretations as well?” A third posits, “Maybe we should read some of the histories as fiction then? And some of fiction as history?”

Does the appeal of this novel lie in this very ambiguity, so that the novel becomes part philosophical inquiry, part historiographical research and reading of the record, part fiction and part nonfiction.

To read this book is to take a thinking person’s journey to uncover the “truth” of a valiant but ultimately enigmatic historical figure.