The Wolf Border: A Novel 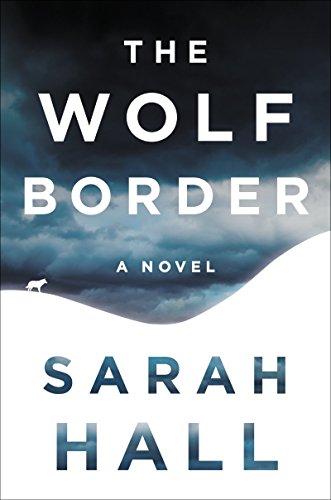 This is a superb novel: luminous and illuminating. You’ll gallop through every page and then read it again. British author Sarah Hall is a writer’s writer . . . as well as a reader’s best friend. She gets it all right. Page turning plot development, command of the protagonist’s third person point of view, gripping story lines, flawed characters (human like you and me), beautiful, shimmering descriptions of her beloved Cumbrian landscape (the Lake District), where she was born and raised.

“In the days that follow, the heat of summer lifts, and the sun becomes less concentrated. September. The trees fluoresce, as if in a final bid to stay green. There is already a tint of autumn, leaves beginning to gather and flutter along the verges . . . In the sky, a more complicated portfolio of colours: lilacs, yellows, like a warning—bad weather brewing in the Atlantic.”

Hall is famous for her precise depictions of landscape, and this book does not disappoint. And that’s just the surface of the novel. There are layers of metaphor and meaning surrounding our deepest associations with abstract concepts of “wolf” and “border.” Cleverly entwined strands of the real and surreal, and conscious and subconscious mind states.

Hall challenges us to plunge deeply into our psyches to uncover, with Rachel Caine, the novel’s protagonist as our guide, understandings of what these words represent. This metaphysical jousting proves a welcome challenge to readers; an unusual phenomenon today, among the vast majority of books published in our one-byte, popular culture.

Rachel Caine is a brilliant loner; she has spent a decade as an expert wolf zoologist on a remote reservation in Idaho attending to a pack of wolves re-introduced into their natural habitat. A surprise invitation from the Earl of Annerdale in Cumbria draws her back home to England. Lord Pennington, the Earl, and owner of this vast estate near the Scottish border, proposes a “rewilding” scheme of his own. After 500 years he wants to reintroduce the northern gray wolf to the estate.

In conservation circles “rewilding,” a term created by conservation activist, David Foreman, describes a relatively new phenomenon. The aim of rewilding is conservation on a significant scale to restore ecological resources, including connectivity between protected areas, and reintroduce apex predators. The hope is to restore natural balance to unbalanced landscapes. According to biologists this conservation method is based on “cores, corridors, and carnivores.”

Near Lord Pennington’s estate resides Rachel’s “difficult” family, from whom she feels she successfully escaped across a physical border to the United States. Ensconced in Cumbria are her selfish, manipulative mother and a dysfunctional brother. Additionally, to her annoyance, Rachel finds she must deal with an unexpected and unwanted pregnancy after an ill-judged one night stand with a fellow ranger during the winter festive season on the reservation.

By moving to Cumbria, Rachel must somehow navigate the shoals of family relationships whose under-currents threaten the boundaries of independence and selfhood—mother, brother, baby, burgeoning love interest, and her enigmatic boss. As complicated as these tracks and trails through the thickets of ties that bind her within family and other borders, her interactions with these (and other) characters are not Rachel’s primary territory; this terrains is inhabited by her relationship with wolves.

Early in the novel we find a clue to her innermost psyche; Rachel presents herself for sex, as would a female wolf. After the push-pull tease in sleazy bars on the outer border of the reservation she finds a succession of males, the hunters, “close-shaven, militaristic, or long-haired with greasy, white marks from sunglasses along their temples.”

Subtle eye signals announce she is ready for sex. She plays the game of shared rounds of drinks then lures them to her truck, where they follow her in their vehicles to the darkness of a reservation forest cleaning. Once in their vehicles she moves “to the metal truck bed . . . damp, smells of oil and blood from occasional deer carcass.”

After initial contact, and making sure a condom is in place, to the appreciation of the men, she presents herself “on all fours, not for his benefit, but the presentation is not lost on him . . . this is different, sudden, abandoned.”

On some profound associative level in these encounters Rachel emanates herself as a female wolf. In another almost hidden abstraction to this mating game, she (the conservationist) dominates the despised hunters (with their guns and swagger) by playing the role of the pack’s alpha female.

Wolves are the iconic emblems of this novel, and borders are multifaceted and complex.

Rachel agrees, albeit dubiously, to head the operation to reintroduce a pair of wolves to the Earl’s estate. They arrive, adapt to their new environment, mate and produce four cubs; while Rachel who has not told the father of her child she is pregnant, gives birth alone. But she has her own family pack, primarily her brother, and the estate vet who becomes her lover. Yet always the wolves are the compass needles within her psyche’s threshold.

“Spring gives way early to summer, the foliage thickening, the light over the western mountains shedding its dullness. Six wolves are silhouetted against the Cumbrian fells. They are no longer aliens: they never were. She is nameless to them. They have everything they need.”

On the first pages of the novel, while on the Idaho reservation, Rachel has a dream of a childhood encounter with a caged wolf contained by a fence in part of a forest near where she lived. Freed by her mother’s permission to do so, preschool Rachel reaches the fence and starts to climb over when she notices a wolf emerge from shadows and “in her dream, the wolf stands looking at her.”

This is her “first communion” with a wolf.  A reservation mystic asks her what the encounter felt like. “How does it feel? Pre-erotic fear. The heart beneath her chest jumps, feels bloody. The wolf’s head lowers: eyes level, keen as gold, sorrowless. ” She climbs down and walks along the fence, while the wolf lopes alongside her but separated from her by the fence border.

“In her brain an evolutionary signal fires. What a mouth like that means . . .  She stops walking, and it stops. She turns slowly and walks the other way. It crosses paws, turns and follows. An echo, or a mirror. She stops, ‘What are you doing?’” She races along the side of the fence but the wolf runs with her, faithfully mimicking her movements. “To the very corner of the cage, where she stops, breathing hard, and it stands looking at her. What are you doing? she says.” As Rachel emerges from her dream, Hall writes the answer, “She knows.”

Rachel’s totemic wolf is forever cornered in her brain and she must liberate its evolutionary physical form from the confines of fences and humankind’s ancient, archetypal lupine fear: to be free across all borders.

Eventually the wolf family breaks out of the estate’s fortified fences and manages to progress across northern England to roam the truly wild, unfenced places of Scotland. The Earl’s rewilding scheme succeeds and he has indeed created a “corridor” for the apex predator (as outlined above.)

Now no longer working for the Earl (who heartbreakingly disillusions her with his double-dealing and political scheming) but as a consultant to the Scottish government on the “rewilding” of wolves, Rachel, too, breaks out of certain of her psychological restraints and ultimately revisits the Idaho reservation to introduce their son to his father.

In the novel, Scotland (a physical boundary, as well as one of Rachel’s metaphysical borders) votes for independence and becomes autonomous: and as envisaged by Hall, a utopian place of freedom and governmental functionality.

Throughout the novel we read of Rachel’s (and Hall’s) disenchanted, dystopian social judgments on the entrenched oligarchic structure of English politics and classist society. These observations echo strands of Sarah Hall’s previous fiction where dystopian sentiment flourishes.

Sarah Hall is young, in her early forties, and this is her fifth novel. She is an honored, prize-winning, and renowned writer. The Wolf Border was published to positive critical acclaim in Great Britain in March 2015 and sold in many European countries as well.