The Price of Salt 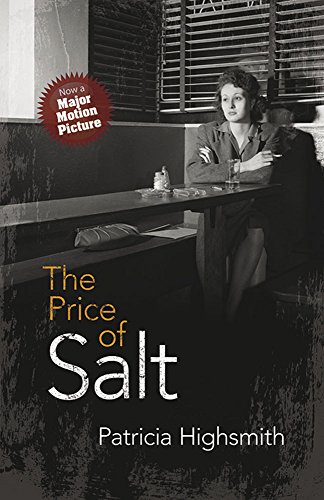 “The Price of Salt is a moving, beautifully conceived and written book. It is a mesmerizing read.”

The Price of Salt by Patricia Highsmith (author of The Talented Mr. Ripley and other well-known novels) first published under the pseudonym of Claire Morgan in 1952 is an American classic. A huge bestseller when first published, currently it enjoys a well-deserved revival with the release of the movie Carol on which it is based. Carol has received rave critical reviews internationally and many awards.

The Price of Salt is the classic American love story of boy meets girl, their attraction immediate, the slow dance of courtship, and the headlong fall into a tempestuous affair. However in this instance (and it is a significant “however”) the protagonists are not boy and girl but girl and older woman.

These two people—the girl (Therese aged 19) and the older woman (Carol in her early 30s)—meet in a department store during the Christmas season. Therese works temporarily as an assistant in the toy department, and Carol is looking for a doll for her young daughter:

“Their eyes met at the same instant. Her eyes were gray, colorless, yet dominant as light or fire, and caught by them, Therese could not look away. Her mouth was as wise as her eyes, Therese thought, and her voice was like her coat, rich and supple and somehow full of secrets.”

The novel is written entirely from Therese’s perspective, a single voice narrative style presently in vogue. We see Carol through Therese’s eyes, we share Therese’s introspection but not Carol’s, and yet Carol emerges as a fully developed character, complex and nuanced. Not only the lens of Therese’s perspective but also the dialog used as a literary device allows us to more fully grasp the coloring of Carol’s personality. Both what she says and how she acts carry layers of implicit meaning.

One of the strengths of the novel lies in our being privy to Therese’s musings and struggles to find the mores and etiquette of her emotional response to a woman. Highsmith’s writing in creating this dynamic is revelatory. Initially, Therese experiences a romantic obsession. On an early visit to Carol’s house, she plays the piano at Carol’s behest:

“It was suddenly too much, her hands on the keyboard Carol played, Carol watching her with eyes half closed, Carol’s whole house around her, and the music that made her abandon herself, made her defenseless.”

All through the book (in less than a year) Therese grows into a woman as the house visits become a long road trip on which obsession becomes mutual love: “She saw Carol’s pale hair across her eyes, and now Carol’s head was close against hers. And she did not have to ask if this were right, no one had to tell her, because this could not have been more right or perfect.”

Slowly the disapprobation of the morally prejudiced world shatters their idyll. Carol is undergoing a divorce and is in a legal battle for joint custody of her daughter. Gradually Therese comes to understand the societal costs of her and Carol’s choices. There is heartbreak for both. Therese and Carol are forced to separate by legal circumstance forged by the divorce proceedings.

Carol stands to lose her daughter on “moral grounds,” but during the process of hearings she refuses to accede to the demands of her ex-husband and his family that she undergo correctional behavior therapy and give up forming liaisons with women. Courageously, Carol, accepting the reality of her identity, refuses to deny her sexuality although it means she cannot see her daughter. Yet love triumphs and the novel ends with a true beginning of the possibilities of a life together.

It is not difficult perhaps to see the novel as tinged with the darkness of the human condition that becomes Highsmith’s landscape in her later novels. Carol, always under control, suave and sophisticated can appear as a spider spinning a web to trap Therese. At first maternal, but with an implicit edge of secret intimacy, she surprises herself by falling so deeply in love—desire becomes need. Having undergone her own journey and by relinquishing her daughter, she gambles on winning back Therese.

In the early part of the book it is easy to see Therese as an unwitting, innocent but willing quarry, but at the conclusion—grown up now—she becomes both predator and prey. Only a naturally talented and consummate storyteller could create the realistic and slowly evolving portrayal of Therese’s character.

In this her second novel, written at age 27, Highsmith writes not by probing the minds of psychopaths but with her heart, the material so close to her doppelgänger, Therese, that only in her last years could she bear to have her name attached to the novel. A private, reclusive personality, Highsmith regarded the work as too exposing of her own sexual orientation and inner life.

The Price of Salt is a moving, beautifully conceived and written book. It is a mesmerizing read.