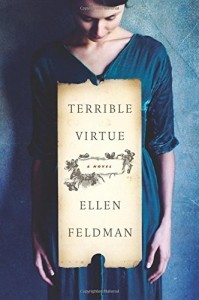 “The novel is a quick, compulsive read but leaves much untold; however, this is fiction and not comprehensive biography.”

But is this the autobiography Margaret Sanger would have written if she had chosen to do so toward the end of her life?

The title stems from a Margaret Sanger quote from 1914: “It is only rebel woman, when she gets out of the habits imposed on her by bourgeois convention, who can do some deed of terrible virtue.” She adds: “A woman’s duty: To look the whole world in the face with a go-to-hell look in her eyes, to have an ideal, to speak and act in defiance of convention.”

With these words, Sanger, as Feldman notes, found her mission.

What is also “terrible” in this novel perhaps is the toll Sanger’s lifelong activism imposed on her two husbands, three children and many lovers. Among other questions, Sanger’s crusading raises the dilemma of whether activists living for a cause, can also be married or even raise children. Of course the “virtue” resides in the remarkable effectiveness of the activism Sanger espoused.

The novel takes the reader of a fascinating and compelling gallop through the surface of Sanger’s life as imagined by Feldman. The novel is a quick, compulsive read but leaves much untold; however, this is fiction and not comprehensive biography. Yet the novel does range over the highlights of Sanger’s life from a small town in upstate New York to a final home in Tucson, Arizona.

Sanger was born into poverty, a daughter of an alcoholic free thinker and town renegade and a haggard mother always exhausted by the bearing of and caring for 13 children. Due to the sacrifice of two older and devoted sisters Sanger was able to train as a nurse. Early on she championed several social justice causes, mingling with, learning from, and working with other progressives.

Ultimately she brought her leadership skills, powerful personality, and idealism (abetted by constant awareness of her mother’s childbearing suffering that caused her untimely death) into legalizing contraception. This struggle consumed her life and led often to violent conflict with puritanical, patronizing lawmakers, sentenced her several times to prison, and left her little option to further her work but to seek asylum in Edwardian England.

Sanger’s narrative is interrupted by short accounts from her children, husbands, sisters, and lovers that counterbalance and often confute Sanger’s telling of her life in which she gives short shrift to the great cost she exacted from those she loved and who loved her. Another fascinating element of the novel is the vignette appearances of the likes of Emma Goldman, John Reed, Big Bill Haywood, H. G. Wells, Havelock Ellis, and other luminaries of progressive movements in the early to mid-20th century.

Among many other pioneering ventures, Sanger opened the first birth control clinic in America in 1916 (illegal), founded Planned Parenthood in 1952, and in 1960 heralded Congress’s legal protection of “the Pill.”

This is a timely book. Since 2010 hundreds of new laws chip away at women’s choice, access to contraception, sexual education, and abortion—all passed by conservative lawmakers. Women’s rights are assailed today by the same puritanical zeitgeist that railed against Margaret Sanger in 1916. Sadly, Sanger’s work is not yet completely done.